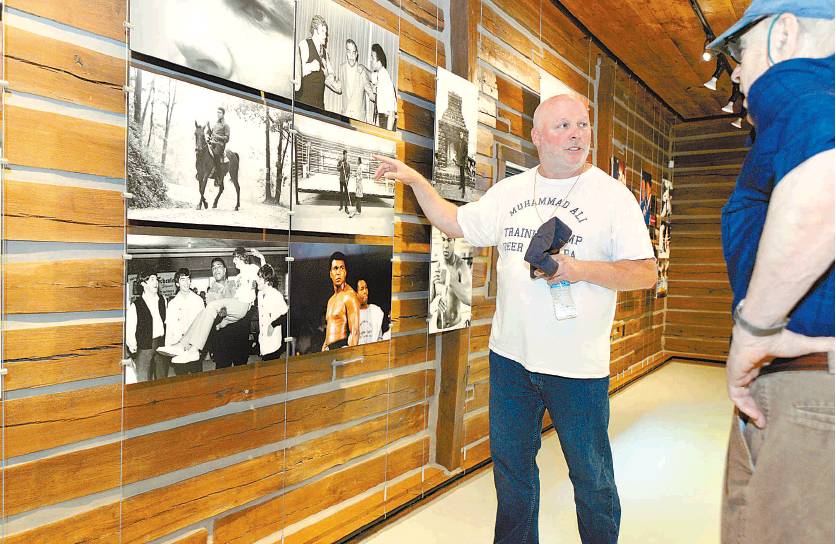 DEER LAKE — Sitting on a large rock with the name of boxing great Jack Dempsey painted on its side, Gene Kilroy shook his head.

He was back at a spot where he had once spent a lot of time, a place that holds a lot of memories. Back in the 1970s, the small camp in Deer Lake, just outside of Orwigsburg, Schuylkill County, had served as a training complex for legendary fighter Muhammad Ali.

Kilroy, a Schuylkill County native, was Ali’s businesses manager. And he was the guy who brought The Greatest of All Time to the camp.

Reflecting back on those days, running the vivid memories through his mind, Kilroy couldn’t muster to name a favorite.

Friday afternoon, Kilroy and a crew of locals, media and those currently involved with the camp, now known as Fighter’s Heaven, gathered to recognize the second anniversary of Ali’s death. The fighter passed away June 3, 2016.

The event was part reunion, with more than a handful of firsthand stories being shared about Ali’s time at the camp, and part celebration of its future. Purchased shortly after Ali’s death by Mike Madden, son of NFL legend John Madden, the camp is being renovated as a minimuseum celebrating the acclaimed boxer.

Everything starts with a story

The story of the Deer Lake camp has a handful of important chapters.

The first involved a kid who grew up in coal country, and happened to end up as Ali’s business manager and confidant.

“I’m the guy who brought him to Deer Lake,” Kilroy says proudly.

Ali had long wanted a place of his own to train, inspired by a visit to Archie Moore’s training facility in San Diego and frustrated by what he felt were unfair terms he was dealing with at a site in Miami. Kilroy had just the place.

Ali loved the 6-acre spot on Sculps Hill, and was drawn to its beauty and seclusion.

“It was away from everyone,” Kilroy said. “It was just enough to keep everyone away.”

That’s not to say Ali and his team were isolated at Deer Lake. He mingled often with the locals, either when they came to watch him spar or when he ventured into town.

But it wasn’t the glaring limelight the most famous person in the world was used to. It was friendly, Kilroy said; it was considerate.

“Everyone was so good to him up here,” he said.

And Ali was good to them.

Kilroy recalled a little boy who visited the camp with his dad. The boy was sick with leukemia, so Ali provided some encouraging words.

A few months later, Kilroy got word that the boy was in the hospital and wasn’t going to make it. He called Ali, and the pair rushed there to see him.

“When we walked in, the kid yelled ‘I knew you would be here,’ ” Kilroy said.

Ali tried to encourage him again, but the boy knew better.

When the boy passed away a short time later, he was buried with a photograph of himself posing with Ali at Deer Lake.

“It’s about the good you do, not all the craziness,” Kilroy said, adding that he has dozens of stories like it about Ali.

Jeff Julian has a few stories about Ali at Deer Lake, too.

He was in his early 20s back in 1978 when he decided to head up from his home in Muhlenberg Township, a secondhand camera in tow, to check out Ali’s training camp.

“I thought it would be an interesting place to shoot,” he said.

Julian said Ali was more than gracious, and allowed him to stick around. He became sort of an unofficial photographer for the camp, and some of his work was on display Friday inside its renovated gym.

He said he was amazed by how well the placed looked, saying its original look has been pretty well recaptured.

“There are just wonderful memories here,” he said. “It was special. This place would be packed, it would get so hot.

“But it was just exciting. The excitement is hard to put into words.”

Madden’s Deer Lake story started much later than most. He didn’t visit while Ali was there, and didn’t know it existed until after he passed away.

But he and his father were both huge Ali fans.

On the day Ali died, Madden was visiting his dad, who was recovering from hip surgery, in the hospital, and the pair saw it on a television news ticker. On his drive home, and when he woke the next morning, Madden soaked in the news coverage of the death.

He wasn’t thrilled with it.

Madden said he was furious over all the mistakes commentators were making, about all the inaccuracies he was hearing.

“It was driving me crazy,” he said.

One story he came across, however, piqued his interest. It was an interview with Ali’s second wife, Khalilah Ali, in which she mentioned time and time again a place called Deer Lake.

Madden did some research and came across a website for the Butterfly & Bee Bed and Breakfast, the current incarnation of Ali’s camp. Turns out it was for sale.

Madden saw his chance to do something to preserve a piece of Ali’s history.

“I thought to myself ‘Are you going to be a bitter guy or do something about it?’ ” he said.

After making the purchase, Madden reached out to Kilroy. The two have spearheaded the effort to bring the camp back to life.

“He put his money where his heart is,” Kilroy said of Madden.

Today, several of the buildings at Deer Lake have been restored.

The gym is immaculate, complete with a training ring and heavy bag hanging from the ceiling. Its walls are covered with photographs, showing Ali on a horse and with the Beatles and training.

There’s a video of some of Ali’s best fights playing in one corner, and another wall is filled with old fight posters and covers of Life magazine featuring the fighter.

Ali’s original living quarters have been restored, too, a small cabin a few steps away from the gym, with a wooden bed and two wooden rocking chairs sitting in front of a stone fireplace.

Using some of Julian’s old photos, furniture and decorations that match what Ali used have been purchased.

The kitchen and mosque at the camp also have been redone and are ready to be shown off.

Sam Matta, the camp manager, said the plan is to start bringing in tour groups of children starting in September. The idea is to eventually open the place to the public and to keep the memory of Muhammad Ali alive for years to come.

“It will be his legacy,” Kilroy said.