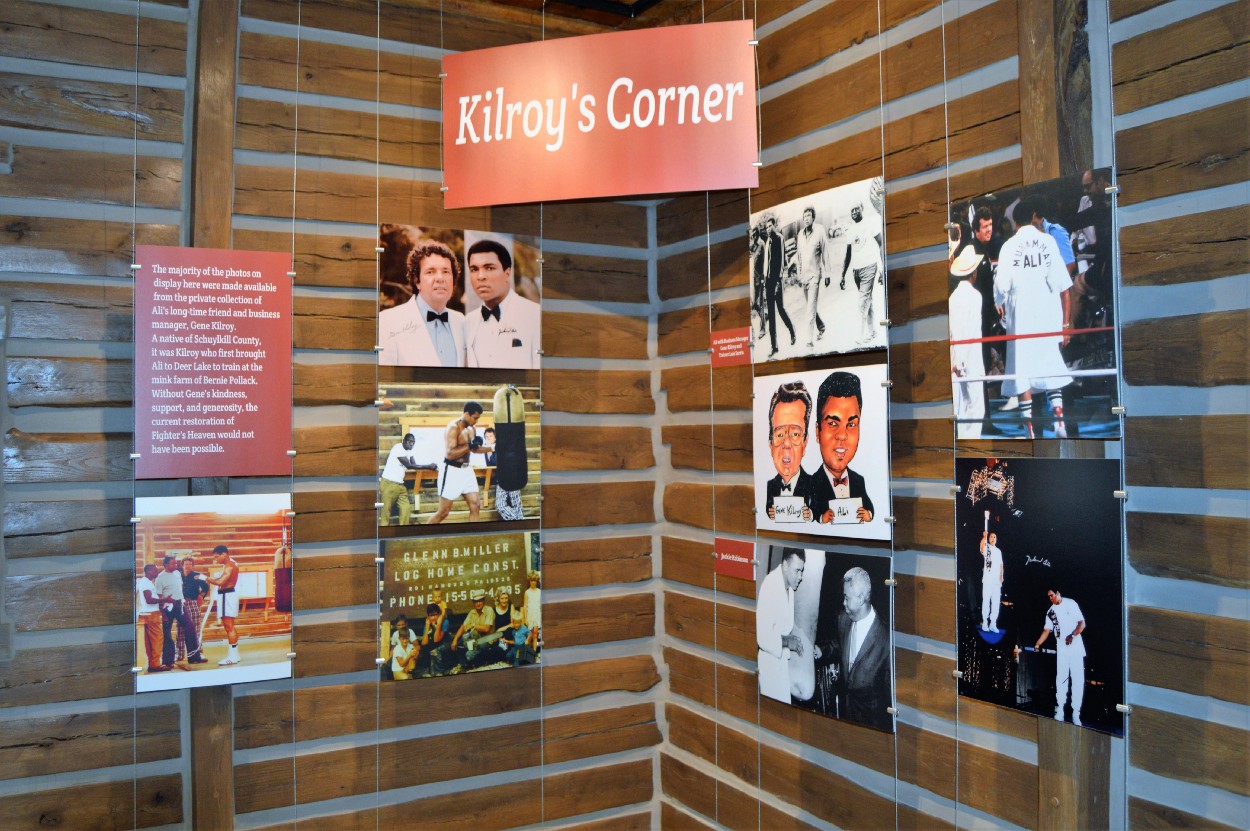 We are often defined by our passions, and over a lifetime we may have just a handful of opportunities to define who we are by our choices. Mike Madden, the son of legendary NFL Coach, John Madden, has chosen to preserve another individual’s legacy with the restoration of Muhammad Ali’s boxing camp in Deer Lake, Pennsylvania. ‘Fighter’s Heaven’ is Mike’s way of sharing Ali’s legacy with future generations by telling his story from the perspective of the people Ali surrounded himself with while training for some of the most important boxing
matches of his career.

Ali was a complex man, but at ‘Fighter’s Heaven’ I watched a video clip that made me understand what was at the core of Muhammad Ali’s beliefs, beliefs that transcended the boxer’s boxing achievements. In his own words Ali answered the following question posed to him by a child:

“What are you going to do when you retire from boxing? ”

Ali answered quickly, with a smile:

“Get ready to meet God. Going into real estate, going into business, teaching boxers, that won’t get me to heaven.”

Ali continued by explaining that God would judge us on how we treated each other, and how we are defined by helping each other. Ali described how he’d dedicated his life so that the use of his name and popularity can help charities by helping people, and uniting people. What Mike Madden has accomplished with ‘Fighter’s Heaven’ is to capture the essence of Ali’s beliefs, and that which defined him as a human being.

As I walked around Fighter’s Heaven I was overcome by the history and drama that drove Ali forward, not only to be one of the greatest Heavy Weight Boxing Champions of all time but also one of the most influential figures of the 20th Century. Ali himself said he was defined by his own spirituality and fought for his principal beliefs both in and out of the boxing ring. What Mike Madden has achieved is more than the preservation of some buildings and old photographs, but rather a real sense of place that spoke to Ali in an emotional and ethereal way.

Spending time with Mike brought me a profound insight into who Muhammed Ali was as a man, enabling me to recognize that I was witnessing one of those rare moments when we make defining choices in our lives.

Mike Madden has created a special experience that allows the visitor to transcend into Ali’s world, and identify with him as another kindred soul searching for the same things that we all search for: a definition of ourselves.

Mike’s passion for preserving Ali’s history has been painstakingly curated throughout every corner of the camps restoration, from the video clip that first welcomes you as you enter the building that houses the restored boxing ring, to the many photographs showing Ali’s love of life and humanity, to a small motivational scrawl on the wall of the trainer’s room that Ali scribbled to himself.

Mike has restored the camp with a vision that is uniquely his own, and as he told me during the interview while discussing another real estate project from his younger years in business:

As we walked around the camp Mike loosened up a bit more and shared many instants from his own life that led him here to Deer Lake, Pennsylvania to preserve a piece of Ali’s history. Mike continued:

“I come to Pennsylvania and I love talking to people. Like I said you never know where your next good idea is going to come from, but everything we have done here at the camp is my idea. I get a lot of people from the boxing community say, ‘Oh I was looking at the camp and I talked to George Dilman and you should do this and you should do that.’ Literally, there were dozens of stories and this place has been on the market for ten years. And with all due respect to the boxing community, those guys had ten years to figure it out.”

Mike went on to say:

“This is a calling. I am enjoying it. I want to do it and I don’t have a boat back home to spend my money on. So, I will spend my money in Deer Lake. Because I care, and I want this to be done and I just want people to know who this man was; I think he is an important world figure, certainly an important American, certainly an important Black American, and this place is great and it’s fun. And what we are doing I am proud of it. I think other people will enjoy it. Really there is no place like it.”

Throughout Ali’s life, he touched an innumerable number of lives on a personal level and each person he touched has a treasured story that they remember as their own. Mike’s own personal moments with Ali go back over thirty years.

And as I listened to Mike, I was transported back in time with him to when he met Gene Kilroy and Ali for the first time. Gene was one of Ali’s close personal friends and managers and it was Gene who convinced Ali to locate his training camp to Deer Lake.

Mike slowly recalled the conversation Gene and he had here at the camp working together to preserve Ali’s legacy and his first memories of him. Gene had said to Mike:

“Do you remember that night that I introduced you to Ali?” Mike had shaken his head. “It was so and so’s daughter’s wedding. It was up at the mezzanine at the Dunes. You and your buddy were out there waiting for Ali.”

Mike explained that Gene was having lunch with his Dad (John Madden) at the coffee shop that day. Gene pulled Mike aside and said:

“And I was there,” said Mike. “And Ali came out and I was holding the camera. My buddy took all the great pictures with Ali. I am like, dude I arranged this, this is my idol. So, I gave him the camera and then Ali saw the camera and he clowned it up with me. Then we walked to the top of the escalator and we went down and we got mobbed. And Gene later recalled and reminded Mike, ‘You had your time with Ali. He showed you a couple of magic tricks on the escalators, you did the thing, you took your pictures and then he got mobbed like he always does.’“

As I listened to Mike’s story, I realized it was Ali and his own desire to help and unite others that was still at work here at Fighter’s Heaven and, through the love for the same individual both Mike and Gene had now joined forces and become friends: sharing their passion and creating a memorial to Muhammad Ali that preserves his struggles and triumphs.